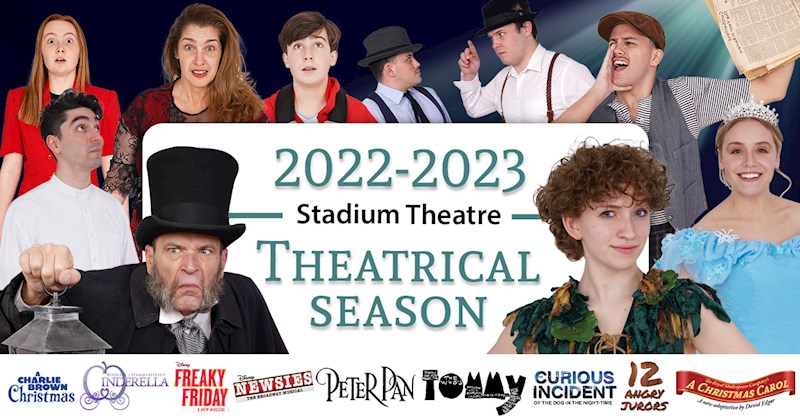 For more information and to register to audition, Contact Jennifer Webb at jennwebb@stadiumtheatre.com.

Directed by Will Gelinas

It's time to carry the banner on your stage with Disney's Newsies! Set in turn-of-thecentury New York City, Newsies is the rousing tale of Jack Kelly, a charismatic newsboy and leader of a band of teenaged "Newsies." When titans of publishing raise distribution prices at the newsboys’ expense, Jack rallies Newsies from across the city to strike against the unfair conditions and fight for what's right!

Auditions will be held at the Stadium Theatre Performing Arts Centre, located at 28 Monument Square in Woonsocket, Rhode Island, on Monday, December 12 and Tuesday, December 13 2022 beginning at 6:00 with callbacks on Thursday, December 15 if needed. Please register to audition no later than Sunday, December 11. Once registered, you will receive a confirmation email.

Please bring an actor resume and headshot to be submitted to the production crew. All those auditioning should prepare a cut of 16-32 measures from a song of your choosing as well as a 1 minute monologue. Dramatic or comedic in genre is at the actor’s discretion. There will be a dance call at the initial auditions. Actors of all ages are encouraged to audition.

Stadium Theatre & Conservatory is dedicated to celebrating and cultivating a culturally diverse, equitable, and inclusive environment. We acknowledge that this process is a journey and that our commitment is essential and ongoing. Actors of all abilities, ages, ethnicities, genders, races, and sexual orientations are welcome to audition for any role that they are interested in playing.

Rehearsals will begin on December 18 and will be held primarily on Tuesday and Thursday evenings from 6:30-9:30 pm as well as, Sundays from 2:00-5:00 PM. *Not all actors cast will be called to every rehearsal. Schedule may vary.

Attendance is required for all tech week dates and performance dates set forth.

For more information and to register to audition, Contact Jennifer Webb at jennwebb@stadiumtheatre.com

The Curious Incident of the Dog in the Night-Time

The Stadium Conservatory - A Story of Progress