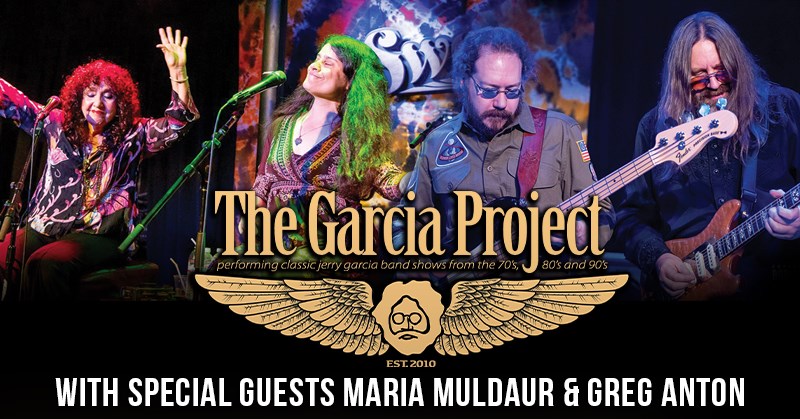 Maria Muldaur to join The Garcia Project for a special recreation concert of a classic show from the 1978 “Cats Under The Stars” Jerry Garcia Band tour. Maria Muldaur (vocals) will be singing with The Garcia Project’s Kat Walkerson, Mik Bondy (guitar), Dan Crea (bass guitar) and Caroline Killoh (piano) with Greg Anton on drums.

Maria Muldaur & Greg Anton will join The Garcia Project on May 28, 2021 at The Stadium Theatre in Woonsocket, RI for one special night to celebrate the 43rd Anniversary of the Jerry Garcia Band’s “Cats Under The Stars” tour from 1978. Jerry Garcia has been quoted as saying that “Cats Under The Stars” was his favorite album and the tour was filled with great songs and energy.

"I spent a lot of nights in a lot of places with the Jerry Garcia Band, and I’m here to say that I really enjoy what The Garcia Project does with those memories.  Mik’s guitar and his and Kat’s vocals stir up some very sweet vibes…Check ‘em out." — Dennis McNally, former publicist for the Jerry Garcia Band & The Grateful Dead

More about The Garcia Project: http://www.thegarciaproject.com

Maria Muldaur is best known world-wide for her 1974 mega-hit “Midnight at the Oasis,”which received several Grammy nominations, and enshrined her forever in the hearts of Baby Boomers everywhere. She started recording with Jerry Garcia and sitting in with The Jerry Garcia Band in '74, joining the band officially from fall 1977 through 1978. Maria has recorded over 40 albums, and continues to perform Blues, Jazz, and Gospel both in the States and worldwide.

“I first met Jerry Garcia in 1974 when he asked me to sing harmony with him on his second solo album and started recording and sitting in with The Jerry Garcia Band whenever possible. I became an official member of The Garcia Band in 1977 through 1979 recording, gigging and touring with them, and have many fond memories of that unique experience!

Recently, I was asked to sit in with a wonderful band called The Garcia Project, who lovingly and reverently recreate different specific sets of the Garcia Band in their hayday. They don't merely recreate Jerry's music, as far as I'm concerned, they are channeling it. Performing with them, I am moved and touched by how much the music moves the audience into a state of joyous community and rapture. The Garcia Project brings us all back to that special time and I'm excited and blessed to participate in giving new and old audiences alike, the chance to relive the Spirit & Magic of the Jerry Garcia Band." - Maria Muldaur

This performance will be held in the Grand Hall. The Safety of our Stadium family is paramount. We are following the state of Rhode Island guidelines to keep you safe. Social distancing protocols will be practiced throughout the event. The bar and concessions will be open during the show.