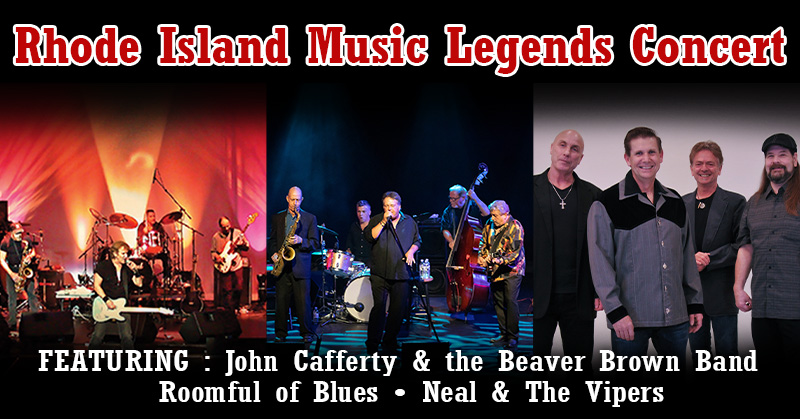 ONE night, THREE Rhode Island Music Hall of Fame bands! Each iconic group will play a set of their hits including John Cafferty & the Beaver Brown Band’s “On the Darkside,” Roomful of Blues’ ”Boogie Woogie Country Girl” and Neal and the Vipers’ “One Drunken Kiss”

The legendary multi-platinum "East Coast Rock'n'Roll" group John Cafferty & The Beaver Brown Band began their career in 1972 and achieved mainstream success in the 1980s with the "Eddie & The Cruisers - Motion Picture Soundtrack".  The hit single "On the Dark Side" held the "Number-One" position on the Billboard Rock charts and the MTV video charts for “five” consecutive weeks.  The album sold over 3 million copies and was certified triple Platinum by the RIAA. Today John Cafferty and the Beaver Brown Band continue to tour and bring their exciting live shows to fans around the world.  In 2012 they were inducted into the Rhode Island Music Hall Of Fame.

For the last 50 Years Roomful of Blues has become legendary in the Blues World. Roomful has toured the world and recorded over 25 albums. With five Grammy nominations and a slew of music awards and accolades Roomful has become a recognized leader in their genre. Blues Music Magazine calls them “the best little big band in the blues.” On record and on stage, Roomful of Blues—led by master guitarist Chris Vachon for the past 22 years—continues to deliver its bone-shaking mix of original songs and carefully chosen covers ranging from jump, swing and proto rock ‘n’ roll to funky, contemporary blues. Their impeccable musicianship and larger-than-life vocals have earned Roomful of Blues five Grammy Award nominations and a slew of other accolades, including seven Blues Music Awards. Twice, the prestigious DownBeat International Critics’ Poll has selected them as Best Blues Band. And now, even after 18 previous releases and thousands of live shows, Roomful of Blues continues to evolve, as they return with In A Roomful Of Blues, their first new studio album since 2011.