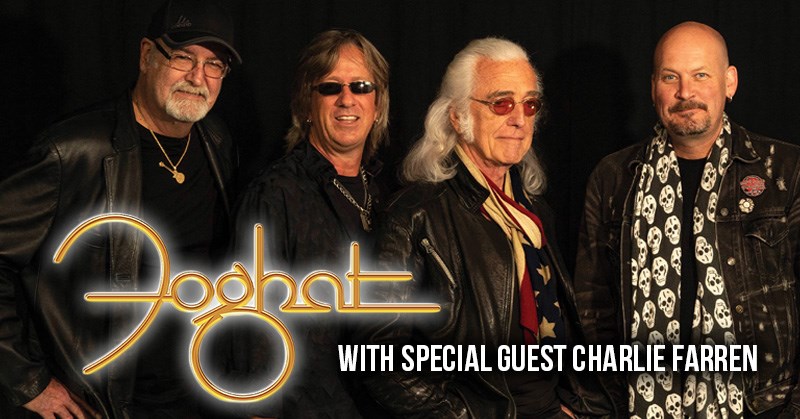 Foghat celebrated their 50th anniversary in 2021, and their live performances show why the band is still around and why they will be able to keep on rockin’ as long as they want to play! Touring is part of their DNA and their music is timeless with classic hits such as “Slow Ride,” “I Just Want to Make Love to You,” and “Fool for the City.” Foghat’s live show is as intense as ever with the incredible energy and musicianship that one would expect and hope for from a seasoned band with such a long musical history and they are bringing their fans along for the ride. These guys just love to play!

Not content to rest on their laurels, the band released a great new studio album in June 2016 titled “Under the Influence”, and another ‘live’ album in June of 2017 called ‘Live at the Belly Up’. They then followed it up with a double CD/DVD in 2021, “8 Days on the Road” (recorded live at Daryl’s House Club in 2019!) All were given great reviews by press & fans alike.

­Formed in 1971 when Lonesome Dave Peverett & Roger Earl left the British blues-rock band, Savoy Brown, Foghat has earned eight Gold records, one Platinum record and one Double-Platinum record.  And they continue to release new music every few years. They have never stopped touring and recording although there have been several ups and downs and changes over the years.  They sadly lost Lonesome Dave Peverett in 2000 and Rod Price in 2005, but Roger Earl kept banging & kicking to keep Foghat’s musical legacy going.

According to a recent review “The ’70s called…but there is no way in hell we are giving Foghat back to them. The iconic band from the past is rocking just as hard as they did decades ago, if not more! Foghat’s thunderous blend of blues, boogie and butt-kickin’ rock ‘n’ roll are shaking walls and fans everywhere. There is so much talent in this band it is ridiculous.  Lead vocalist/lead guitarist Scott Holt played with Buddy Guy for over 10 years, and lead/slide guitarist Bryan Bassett played with Wild Cherry and Molly Hatchet.”  Bass player Craig Macgregor who had been with the band since the ’70s, unfortunately became ill in 2015 and was unable to play, and we sadly lost him in February of 2018.  Craig had recommended the very talented & personable Rodney O’Quinn as a ‘fill-in’ who came to Foghat via the Pat Travers band where he proved he knew how to lay down a solid groove. O’Quinn viewed MacGregor as a mentor and is a great permanent addition to the band.  And on drums, of course, is the man we must thank for keeping Foghat going…founding member Roger Earl, who’s positive attitude and solid drumming style and pure joy of playing has been an inspiration to all.”

The band has started work on yet another Blues/Rock Studio Album to be released in late 2022!

Charlie FARREN burst onto the national scene in the early 80’s as lead singer of THE JOE PERRY PROJECT, teaming up with Aerosmith lead guitarist Joe Perry and releasing an acclaimed album on Columbia Records. Farren penned the Billboard charting classics “Listen To The Rock” and “East Coast, West Coast”, also co-writing four songs with Perry including the hit “I’ve Got The Rock ‘N’ Rolls Again”.

The Joe Perry Project sold out theaters across the country and toured arena's & stadium's around the world with artists such as Ozzy Osbourne, Rush, Heart, ZZ Top, and Alice Cooper.

FARREN subsequently formed FARRENHEIT, a trio releasing a self-titled debut album on Warner Brothers, produced by Keith Olsen. Three singles from that album, “Fool in Love”, “Bad Habit”, & “Lost in Loveland”, as well as video exposure on MTV, established FARRENHEIT as one of the era’s premier rock acts. Highlights for FARRENHEIT included the coveted opening slot on the 75+ date BOSTON ‘Third Stage Tour’, sold out from coast to coast, including a performance at the ‘Texxas Jam’ to a sold out crowd of 85,000 people at the Cotton Bowl in Dallas, TX.

Charlie continues to be one of America's most original and compelling musical artists. He takes the stage alone, and leaves with a roomful of new believers.