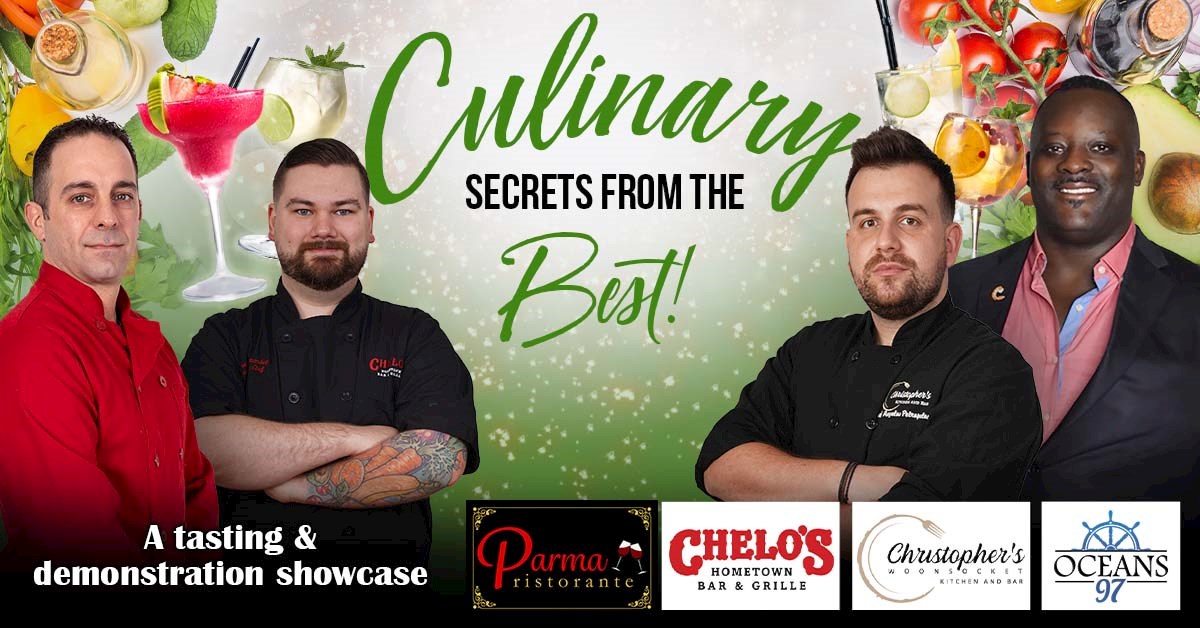 Culinary Secrets from the Best!

This January treat yourself to a night out filled with delicious food and refreshing cocktails! The Stadium Theatre’s Culinary Secrets from the Best is a unique tasting and demonstration showcase experience. This event will feature four prominent culinary artists as they each prepare their signature dish and cocktail pairing live on stage. Guests will observe the live demonstration in the Grand Hall while enjoying each dish as it is served to them at their very own dining station. Each guest will also receive their own recipe cards so you can recreate each dish and cocktail at home. Join us and help support the arts as the Culinary Secrets from the Best brings new meaning to the phrase dinner and a show!

Attendees must be 21 and over.

This event will be held in the Grand Hall. Tickets are general admission, after purchase your tickets will be mailed to you and will indicate your seat number.

Parma Ristorante - David Ashworth
Parma Ristorante is a cozy Italian American restaurant owned and operated by Chef David and wife Laura. David and Laura pride themselves on bringing families together while dining at their restaurant. Parma is open Tuesday through Saturday, with private event bookings available on weekdays and Sundays.
Located at 266 Putnam Pike, Smithfield, RI

Chelo's Hometown Bar & Grille - Zach Fernandez
Founded in 1955, Chelo's has become Rhode Island's largest family-owned restaurant chain. For over 65 years, it has been our pleasure to bring you, our valued customer, homemade consistency and quality in every delicious bite. At Chelo's we pride ourselves on having outstanding food selections, personal service, and always making sure that you enjoy your visit. This is our way of saying, "Thank you! Please come again."
Located at 490 Clinton St, Woonsocket, RI | Multiple locations across Rhode Island

Christopher's Kitchen & Bar - Angelos Petropoulos
Christopher’s Kitchen and Bar, located less than a mile from the Stadium, offers an enjoyable dining experience including two bars and a lounge area with hand crafted cocktails. Serving a wide variety of American cuisine with a Mediterranean twist! Offering catering services, function services with a private room, as well as take out and DoorDash/GrubHub delivery! Serving dinner Wednesday through Sunday, and Sunday Brunch!
Located at 2 S. Main St, Woonsocket, RI